Some of my writings that haven't found a home
I just started another site
​https://maggiesmusing.com
​A Time for Musing..

Recently, I watched a video explaining how Celtic myth and legend are different than most of the stories told by other cultures like the Greeks, Romans, English and German….  Thanks to authors like Rosemary Sutcliff and P L Lynch, I have been able to process a timeline as to when and where these tales originated, knowing that so many were scribed by the Christian monks and priest that came long after them.
For a person who usually likes neat and tidy; I have to admit, the study of these has been challenging, but the lure of the magical tribe of the Tuatha de Danann overcame any discouragement I had to dissuade my curiosity.  In fact, it is because of the whimsey, magic and words of romance that I was challenged.
I have worked through some of the tales of the elusive tribe including their mystical arrival to Ireland.  In my book I have Isolde’s daughter Aine who moved to the north telling the stories of the famous King Conchobar and the Red Branch including the epic story of “The Battle of Cooley” which included Queen Medb and CuChulainn and has been called the Illiad of Ireland.

This morning I have waded into the cycle of Fenian which evolved in the south of Ireland.  The stories of other famous kings and the men who surrounded them.  The fianna was a noble fellowship which reminds me of the knights of the Round Table in medieval England.  They too had a creed, an unwritten understanding which qualified them to belong.  They were the strongest, swiftest, bravest and definitely the most skilled warriors in the land.  They respected all women and children, were loyal and helped the poor.  The thing that warms my heart is about their devotion to words, as these bravehearted men were also lovers of stories and writers of poetry.  How cool is that?

So, as I begin my reading about Finn Mac Cumhaill and his son Oisen, I invite you to peek at some of the clips I will share here and on my facebook….  And on maggiesmusing.com

See the Table of Contents page under My Books in the menu too!
Diarmuid and Grainne 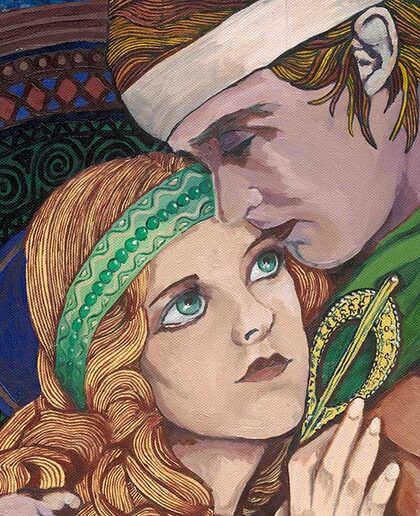 Musings about an Irish tale.

As you may know, I have been busily reading, organizing, and retelling myths and legends from Irish past.
The tale “Diarmuid and Grainne” has grabbed my attention because of the way it connects the myth with the legend.  Grainne, being the beautiful and selective daughter of King Cormac, who doesn’t take marriage lightly.  She snubs Finn mac Cumhaill, captain of the Fianna when he desires her.  She thinks him too old and turns her fascinations to Finn’s young, handsome warrior, Diarmuid, the loyal champion and foster-son of Aengus Og, Tuatha de Danann prince of love, who also gives Diarmuid the deadly sword once owned by the sea god, Manannan mac Lir.  Isn’t this magical?

Well, the story has me while Grainne delivers a geis on Diarmuid which he can’t refuse…causing him to rescue her, love her and flee from Finn who is insanely jealous.  But like so many Irish tales tend to do, it looses me in the drawn out adventures that follow.

I read a version of it, however, in the book, Celtic Mythology and Tales of Gods, Goddesses and Heros written by Philip Freeman.  I highly recommend it.
And am grateful to him from helping me when I got stuck.  I have read multiple versions and still can’t decide how to end mine. 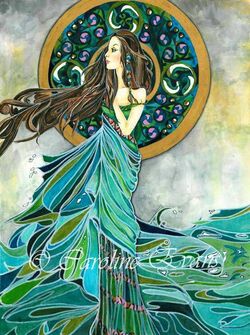 ​(This will be in the new "Irish Myths and Legends Book")

A gentle summer breeze ruffled the maple leaves and warmed the damp earth which remained after the rain.
It was a hot day by Irish standards, perfect for a walk in the forest, then through field and across the lands kept by the Dunlace kingdom.  Isolde, wearing a sleeveless frock and bonnet, carried a satchel of books and pens to share.  This had become a ritual for mother and daughter ever since Aine was small, so today her young daughter would think it not strange, when they reached their favorite knoll by a tree to spread their blanket to be.
“I know that we usually tell stories or write them, Aine….but today I have brought with me something to share.”

She looked into the curious face of her daughter.  Feelings of pride and love cursed through her, as she saw both herself and Tristan.  Isolde knew they had been truly blessed.  Her daughter loved hearing the stories of her ancestors and culture.  She would keep them in her heart as she grew and pass them along to her children’s children.  How this pleased her mother as the world around them was ever changing.  She feared that especially the old ways would be lost.
Reaching into her bag she pulled out an old hard- cover book, golden and tattered.  On its cover were the letters to spell…

“This is an ancient treasure, Aine….it is not written in our language, but the pictures will help me to read it to you.
“We have talked of them before, mum. They are the gods and goddesses the faeries in the mounds!”
“Yes, Aine.  You were named for one of them,” Isolde smiled.  “Goddess of Love”
Aine beamed, but then returned her attention to the book.
“Is Brigid in there?”  she asked.  Isolde laughed and opened the book to her favorite page as well.
“You love her as I do, Aine…the Goddess of Fire, the Hearth and Healing.  She is our mentor always, but there are more.”
They turned through the pages admiring their Mother, Danu, the Sun God, Lugh, and Goddess of War, Morrigan.  There were at least 20 of them and Isolde named each one with pride.

This book will be yours, Aine. Your father and I know how you have taken an interest in Ireland.
Someday, you will pass this on to others and they will do the same so that it will not be forgotten.

“Oh!  They will never be forgotten, Mother.”  Her eyes then fell upon the smaller book which was in the satchel.  She thought she had seen it before.

“This book is my journal, Aine.  I will keep it till I pass into the next life.  But I wanted you to see it close up.
Isolde opened it up.  She had started writing in it as a young girl shortly after her father, the Viking chieftain, had died in battle.  She had just returned from Avalon, where she had learned reading and writing and religion.  It was where she had met Guinevere and grew close to Vivianne and Merlin.
In her journal she had told of her wanderings to other lands and realms.  In it she told about loving Tristan.

Aine reached for the diary just as Isolde handed her another.  It was the same size, hard covered, with gold trim.  The front was rose, decorated with celtic knots.  She took it into her hands and flipped through the thin unlined pages.
“It is beautiful, mum…I will treasure it.”
“I know you will, tearma deiridh.(my darling).
Isolde thought about how both their children had attended school at Cill Dara.  Her Christian friend, Brigid had founded the monastery which featured all the arts; music, poetry, literature and especially the skilled crafts.  Talented monks and druids had transcribed and using quill pens and ink made from holly berries and oak apples.  Both children were mesmerized by the sacred calligraphy in the scriptorium there.  Isolde would find them a book just for illustrating as well. 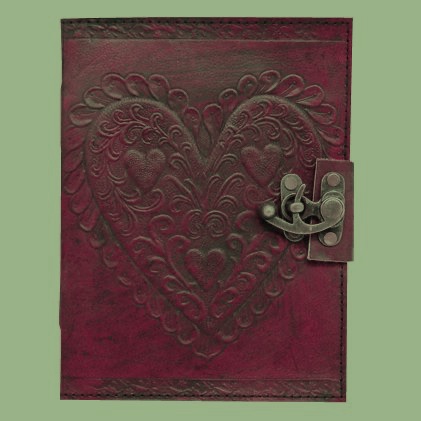 ....more about the Tuatha de Danann

More and more I'm becoming interested in writing about this magical tribe who live beneath the mounds in Ireland.
I have created a new page for this new book called Irish Myths and Legends.  You can find out more about it under books.
​ Here is a site I'm studying as of recent:  https://www.aliisaacstoryteller.com​ 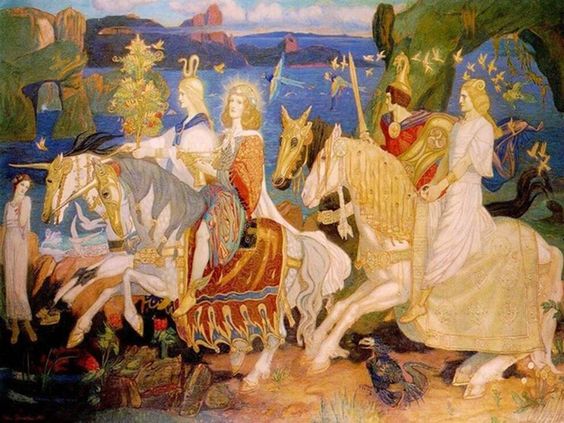